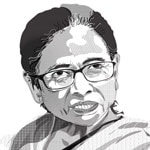 Mamata Banerjee is a TMC candidate from Nandigram constituency in the 2021 West Bengal Assembly elections. Her profession according to the election affidavit filed with the Election Commission is: Social Work & Politics. Mamata Banerjee's educational qualifications are: Post Graduate and is 66 years old.

This TMC candidate, in the election affidavit mentioned 0 criminal cases registered against Her.