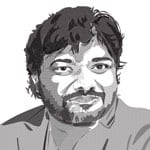 Babul Supriyo is a BJP candidate from Tollyganj constituency in the 2021 West Bengal Assembly elections. His profession according to the election affidavit filed with the Election Commission is: Minister Of State For Environment, Forest and Climate change Government of India. Babul Supriyo's educational qualifications are: Graduate and is 50 years old.

This BJP candidate, in the election affidavit mentioned 13 criminal cases registered against him.

This General Assembly constituency has an estimated Scheduled Caste population of 5.14%. The estimated literacy level of the district in which this constituency falls in is 78.57%.

Among the first-time voters in 2021 in Tollygunge, there are a total of voters in the 18-19 years age group.